Arrhythmia takes many forms, from frequent heartbeats to sustained life-threatening tachycardia. Catheter ablation techniques effectively reduce the risk of recurrent arrhythmias and, in some cases, of sudden cardiac arrest. But ablation, in which pediatric cardiologists thread a series of catheters intravenously to the patient’s heart to block the sources of the abnormal heartbeats, historically has required fluoroscopy imaging to visually guide them. Moreover, fluoroscopy, notes interventional pediatric electrophysiologist Jane Crosson, exposes the pediatric patient to radiation—not an insignificant risk over a patient’s lifetime. 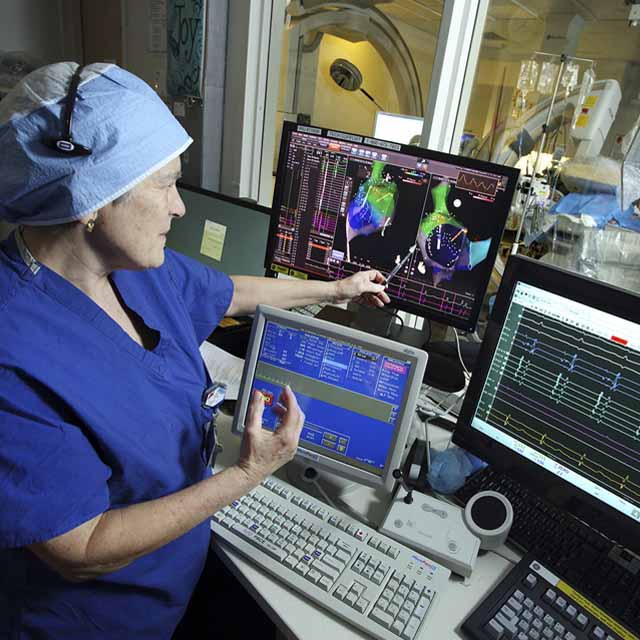 “National data shows that only about 12 percent of X-ray exams are for interventional cardiology or electrophysiology procedures but nearly 50 percent of a patient’s lifetime radiation exposure comes from the cardiovascular labs,” says Crosson.

To reduce that risk for pediatric patients, who are more radiosensitive than adults, Crosson has employed technology that minimizes or, in some cases, eliminates the need for fluoroscopy in placing the catheters. By superimposing a few fixed or static fluoroscopic images onto a 3-D anatomical map to visualize the catheters in the patient’s heart, Crosson has been able to confirm their location without the need for real-time fluoroscopy and its associated radiation exposure. Using this approach, researchers such as Crosson have found a 64 percent reduction in fluoroscopy times and 60 percent in dosages for EP ablation procedures.

While fluoroscopy allows the operator to see more of the catheter and its course through the heart, this new system, called electro-anatomic mapping, allows precise localization of important structures in the heart, including the native conduction system and extra electrical pathways that cause the arrhythmias. By reducing fluoroscopy and ionizing radiation, electro-magnetic mapping also improves the safety of these procedures.

“Generally you want to decrease patients’ exposure to radiation, and the younger you are, the longer you are living with that risk,” says Crosson. “A small amount of radiation is OK, but the more you have the higher your risk of cancer.”