Turning Back the Clock on Treatment-Resistant Prostate Cancer 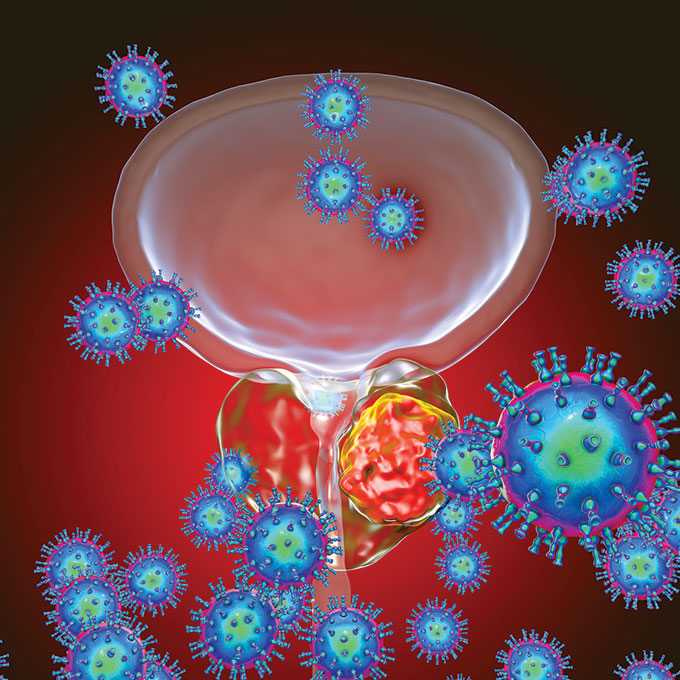 “Neuroendocrine prostate cancer, a highly aggressive lethal variant, is emerging as an adaptive mechanism for resistance to AR pathway-targeting agents in mCRPC,” says scientist W. Nathaniel Brennen, Ph.D. “It is now recognized that many patients with advanced mCRPC have mixed disease,” with some cells that still respond to AR-targeting agents, and neuroendocrine cells that do not. Thus, next-generation therapeutic strategies “that can combat both subtypes co-existing within the same patient – often within the same tumor – are urgently needed.”

Brennen has identified a highly promising target: an enzyme called lysine-specific demethylase 1 (LSD1). “LSD1 plays a critical role in the epigenetic (reversible changes in gene activity) reprogramming required for this adaptive resistance,” he says. It is overexpressed in primary prostate cancer, and its production goes way up as cancer progresses to mCRPC. “LSD1 is directly implicated in prostate cancer proliferation and progression through both AR-dependent and –independent mechanisms. Therefore, we hypothesize that blocking LSD1 can reverse the epigenetic adaptation that is necessary to maintain this treatment-resistant status.” If this hypothesis proves to be true, an LSD1-blocking agent could, in effect, turn back the clock in prostate cancer, allowing ADT and AR-blocking drugs such as abiraterone and enzalutamide to work once again. It also may “prevent prostate cancer from developing the ability to survive in an environment without AR signaling.”

In collaboration with Hugh Young Rienhoff Jr., M.D., CEO of Imago Biosciences, Brennen is “evaluating a novel LSD1 inhibitor (Bomedemstat) for activity against prostate cancer.” To date, Bomedemstat has proven safe and well-tolerated in more than 200 patients with a variety of diseases, including acute myeloid leukemia. “Based on the robust activity observed in our preclinical models, particularly against the neuroendocrine subtype, we have teamed up with Drs. Adel Mandl and Michael Carducci to test this hypothesis clinically in patients with advanced mCRPC.”