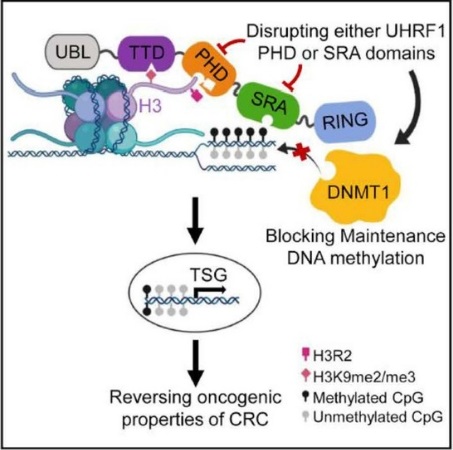 Working with human colon cancer cells and mice, researchers led by experts at the Johns Hopkins Kimmel Cancer Center say they have successfully blocked the activity of portions of a protein known as UHRF1 and restored the function of hundreds of cancer-fighting genes that became “misregulated” by the disease.

In a report on the research, published online, April 4, 2019, in Cancer Cell, the investigators say the findings could lead to an entirely new strategy to fight a broad range of cancers.

Researchers have long known that gene mutations can cause cancers. However, it recently became clear that faulty gene regulation can also prompt and maintain cancers, explains study leader Stephen Baylin, M.D., Virginia and D. K. Ludwig Professor for Cancer Research and professor of oncology and medicine. This second phenomenon can occur through a process known as epigenetics, in which chemical tags settle onto genes to turn them on or off.

One type of chemical tag, called a methyl group, typically silences the function of genes once it’s clipped on by cells. Cancers harness this type of epigenetic regulation, using it to broadly turn off genes that cells normally use to fight the onset or growth of cancer.

Blocking a protein helps turn cancer fighting genes back on, could lead to new strategy for many cancer treatments - @hopkinskimmel Click to Tweet

Researchers have attempted to adapt this strategy to the treatment of cancer by developing drugs that knock off methyl groups to turn cancer-fighting genes back on. However, Baylin says, it’s been a challenge to develop drugs that robustly penetrate solid tumors and effectively remove methyl groups simultaneously. Consequently, drugs such as 5-azacytidine and entinostat haven’t yet been as effective as researchers had hoped, particularly in solid tumors.

Looking for a new way to influence cancer epigenetics, Baylin and collaborators from the Van Andel Research Institute and Tongji Medical College in China turned to UHRF1. Although this protein was known to be responsible for adding and maintaining methyl groups, Baylin says it has never been fully explored as a way to block methylation and make it a potential drug target.

To better understand how UHRF1 operates, the researchers devised an experiment that allowed them to block discrete parts of this protein in human colon cancer cells with established abnormal methylation patterns. Their results showed that two distinct segments of the protein were pivotal in helping cells maintain these abnormal patterns: one called plant homeodomain (PHD) and another called SET and RING-associated domain (SRA).

When the researchers blocked these domains by inserting mutations in key regions, tests of how abnormal DNA methylation and gene expression were affected showed that hundreds of cancer-associated genes became demethylated, returning to normal levels of protective activity. As a result, Baylin says cells with blocked PHD and SRA were significantly impaired in their ability to divide and migrate, processes that are hallmarks of cancer.

Similarly, working with mice in which human colon cancer cells were implanted and grown, the researchers found that blocking PHD and SRA or the function of the entire protein consistently caused established tumors to shrink and blunted metastasis, the process by which cancer cells spread throughout the body.

Finally, to get a sense of how UHRF1 operates in people, the researchers looked at levels of this protein and the activity of genes that this protein suppresses through methylation in samples of human colon cancers obtained by the Chinese collaborators from more than 300 patients at the time of surgery. They found that tumors with higher levels of UHRF1 had lower levels of activity in cancer-fighting genes and vice versa.

Clinical records of the patients showed that the more UHRF1 is present at increased levels, the worse patients’ outcomes were overall. That is, in over 150 patients whose tumors had high UHRF1—levels four to 10 times above levels in normal tissue—recurrence of tumors after surgery occurred 20 months earlier and led to an average of two years shorter overall survival compared with those with lower levels of this protein.

Together, Baylin says, the findings suggest that repressing those two key domains could offer a new way of controlling cancers. He and his team are working with a company to develop a drug to accomplish this goal, either alone or in combination with existing drugs. Because methylation patterns go awry nearly universally in cancer, he adds, such a drug could help fight a wide range of cancer types.

“By harnessing the power of UHRF1 we could fight cancers in a whole new way,” says senior first author Xiangqian Kong, Ph.D.