October 20, 2017
“I’m honored to work alongside colleagues at both hospitals for our shared patient communities.” - Raymond Fang

The Johns Hopkins Hospital and Johns Hopkins Bayview Medical Center, both in Baltimore, have long been recognized as powerhouses for acute care surgery. Although the two hospitals have traditionally operated in a mostly separate fashion, united mainly under the Hopkins name, changing practices in the field are making them stronger together, says Charles Reuland, executive vice president and chief operating officer for both the hospital and the medical center. Toward this goal of a stronger integrated hospital system, the two centers are integrating their acute care surgery teams to provide consistent, evidenced-based care to patients treated at both hospitals.

“Instead of viewing themselves as part of the team only at one location or the other, our surgeons will be part of acute care at Johns Hopkins and share efforts at both hospitals,” he says. 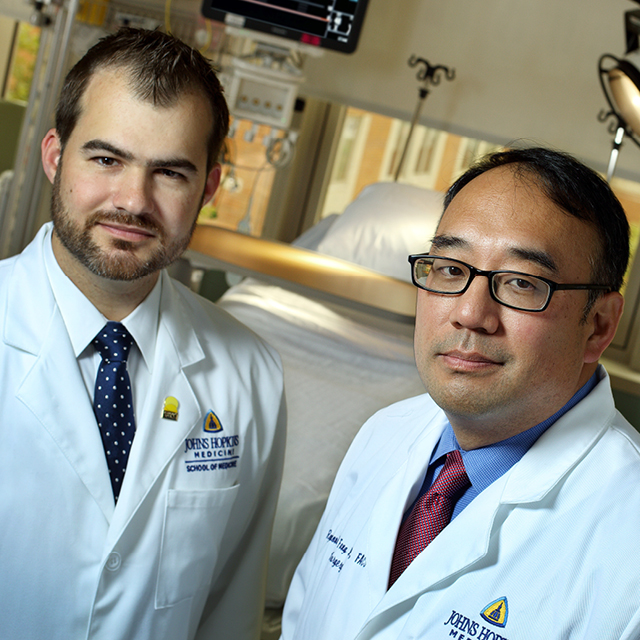 Acute care surgery, which delivers trauma, emergency general surgery and surgical critical care, has traditionally been handled by a combination of surgeons who specialize in this field as well as general surgeons and others who take acute cases on call, explains David Efron, chief of acute care surgery at The Johns Hopkins Hospital. However, he says, the field is shifting toward more specialized care provided by surgeons with specific trauma and acute care expertise. As such, there is value to having 100 percent of this type of coverage provided by surgeons in this specialty. This already occurs at the hospital; now faculty at both institutions will be within the unified Division of Acute Care Surgery.

In August, Fang was joined by Alistair Kent, who trained at both hospitals as a trauma/acute care surgery fellow. Kent’s longstanding collegial relationship with faculty and staff at both institutions during his training, Efron says, makes him a boon to the cross-hospital team.

“When I was in Germany, we all worked our hardest to help our men and women injured in the wars. We did everything we could to bring them back,” Fang says. “I see that same motivation at The Johns Hopkins Hospital and Johns Hopkins Bayview, and I’m honored to work alongside colleagues at both hospitals for our shared patient communities.”