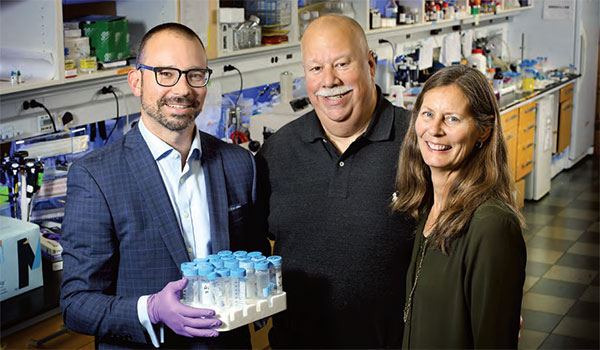 Dr. Pierorazio, Kevin and Trish Kiernan Working together to save lives from kidney cancer.

They call themselves the Go Team.” As in, “when you get the phone call, you go!”

Discovery is full of stories about remarkable doctors and scientists working hard to save lives and improve quality of life from urologic cancer. The remarkable person in this story is a patient, Kevin Kiernan.

Just before Labor Day in 2015, Kevin was at the movies with his wife, Trish. He felt pretty good; in fact, he had just had a physical and gotten a clean bill of health. Then everything changed: he developed pain in his side, went to the urgent care center in his hometown of Telluride, Colorado, and got a late-night CT scan for a probable kidney stone.

The pain got a lot worse, and all of a sudden, so did his diagnosis. “The doctor said, ‘There’s a huge tumor on your kidney and all kinds of questionable activity in your circulatory system. You’re susceptible to a clot or a stroke,’” says Kevin. “That was a shocker. It just came out of nowhere.” Trish went home, packed a suitcase, and told their kids what was happening. Kevin went by ambulance to the hospital in Grand Junction. Early the next morning, he received the grim news that his cancer had traveled up from his kidney to his vena cava and had reached his heart. And then: “Get your affairs in order. You probably don’t have long to live.”

At this point, Kevin says, “We were just in shock. The urologist said, ‘I’ve read about this, but never seen it. We don’t have a clue as to what to do.’ I said, ‘Where do I go?’ He said, ‘I’ll start researching. You start researching. Get on the phone and call everybody you know.’”

One of Kevin’s first calls was to his friend, Missy, whose husband had been successfully treated for prostate cancer at The Brady by urologist Ted Schaeffer (now Chief of Urology at Northwestern). Missy texted Schaeffer on Labor Day. Within an hour, Kevin got a text from Schaeffer. In it was a link to The Brady’s webpage, where not only was Kevin’s very rare condition, “Kidney Cancer with Vascular Invasion,” discussed; there were video clips of the operation to treat it.

The message from Schaeffer, Kevin recalls, was: “We’ve got a team.” Within a day, Brady urologic surgeon Phil Pierorazio called and said, “How quickly can you get here?” Kevin made plans to fly to Baltimore immediately. “About an hour later, I got an email from Pierorazio, copied to all the different surgeons,” says Kevin. The multidisciplinary team of surgeons, an interventional radiologist and a specialized anesthesiologist, was very familiar with every aspect of this difficult operation and ready to perform it on short notice: “They call themselves the Go Team,” says Kevin. As in, “when you get the phone call, you go! My cancer was as advanced as it gets, but Phil Pierorazio said they probably see 10 or 12 patients a year as advanced as I was.”

The surgery, on Monday – just a week after Labor Day – took 11 hours and involved full cardiac bypass. In a well-orchestrated procedure, the team removed Kevin’s kidney, cooled his body temperature, temporarily stopped his heart, took the tumor out, reconstructed his heart and his vena cava, then warmed him back up and brought him to the ICU.

Kevin’s surgical margins were negative. “My experience here at Hopkins saved my life and allowed me to see my son get married, and hopefully will allow me to see my other kids get married and have kids,” he says, “and that’s an amazing gift.”

After the operation, Kevin and Pierorazio started talking. Kevin asked whether there had been any risk factors or early warning signs that he should have seen. “He said: ‘That’s the problem with kidney cancer, why the fatality rate is so high. There aren’t any symptoms, because you have another kidney that masks it. There’s no way you could have known.’ I said, ‘How could that be? Can people just start getting preemptive scans?’” Pierorazio told Kevin that it was not feasible to scan everyone – but that he and urologist Mohamad Allaf were working on a way to detect a diseased kidney in urine. Kevin asked what he could do to help, and he and Trish committed a million dollars to get this urine test developed.

Kevin and Trish have also joined the Brady Advisory Board. “I was fortunate enough to have great care, and now I’m also fortunate enough to be involved in helping save lives from kidney cancer. Trish and I are very blessed. We had been wondering what we could do to make a difference: this is it.”

In April 2018, Kevin’s cancer came back. “But in the two and a half years they bought me with the surgery, immunotherapy is now out of trial, and they are treating me with these tools that weren’t available then to extend my life,” he says, adding: “What Hopkins gives you is the peace of mind that you’ve made every right choice. Most people wonder: Should we get a second opinion? Are we doing everything we can? That just eats you alive. But the day I walked in that door, I knew there wasn’t anything else we needed to do; that now it’s just up to fate, and that’s huge.”

Kevin is very encouraged by the success of immunotherapy in treating cancer, and by the recent momentum seen worldwide in testing these newest drugs. “If Pierorazio and I, with the urine test, can get the original diagnosis before cancer grows, and surgery and immune therapy can knock it out, then maybe we’ve found a curative treatment for kidney cancer. That’s what I’m excited about.”