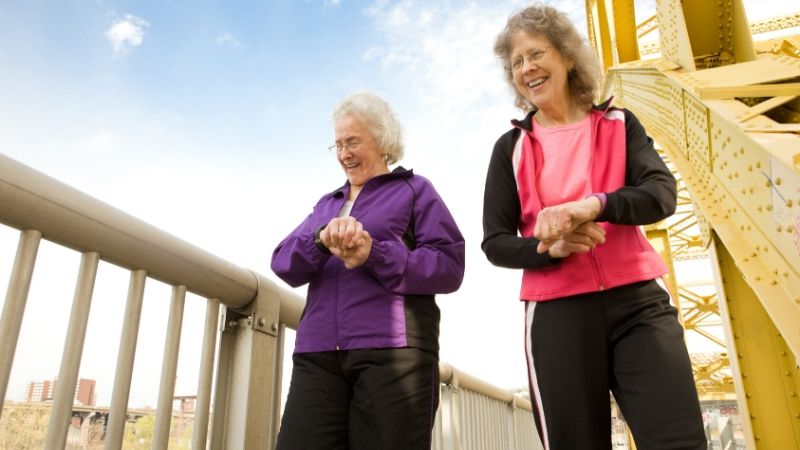 A federally funded study by Johns Hopkins Medicine researchers shows that wearable accelerometers — mechanical sensors worn like a watch, belt or bracelet to track movement — are a more reliable measure of physical activity and better than patient surveys and other methods used by physicians at assessing five-year risk of death in older adults.

The research also added to evidence that an accurate and objective accounting of physical activity outperforms traditional predictors of mortality within five years, such as age, smoking, diabetes, alcohol use, or history of cancer or heart disease.

Based on these findings, the researchers say physicians could confidently use the devices’ fitness profiles to help patients change unhealthy behaviors, increase physical activity and, potentially, extend healthy lifespans.

While their study is far from the first to report an association between physical activity and risk of death, the investigators say their findings, reported in the Oct. 15 issue of The Journal of Gerontology: Medical Sciences, is among the first to offer solid evidence that wearable activity trackers provide key predictors of mortality that outperform other measures.

“People can overestimate or underestimate on surveys how much and when they move, but wearable devices provide accurate data that cuts through the bias and guesswork,” says Jacek Urbanek, Ph.D.,assistant professor of medicine at the Johns Hopkins University School of Medicine and a member of the research team. “The technology is readily available and relatively inexpensive, so it seems feasible to be able to incorporate recommendations for its use into a physician’s practice.”

“We’ve been interested in studying physical activity and how accumulating it in spurts throughout the day could predict mortality because activity is a factor that can be changed, unlike age or genetics,” says Ciprian Crainiceanu, Ph.D., professor of biostatistics at the Johns Hopkins Bloomberg School of Public Health, who is also a member of the research team.

For the new study, the researchers focused on the total amount of physical activity and times the participants were most active during the day.

First, using data from the National Health and Nutrition Examination Survey (NHANES) conducted by the U.S. Centers for Disease Control and Prevention (CDC), researchers looked at 33 predictors of five-year all-cause mortality, including 20 objective measures of physical activity, such as total activity, amount of time not moving or amount of time doing moderate to vigorous activity. In this way, they ranked physical activity and other factors, such as total cholesterol, smoking status, and having cancer or diabetes, to identify which ones best predict mortality within the following five years of the study population.

For their look at physical activity, the researchers used accelerometry data from nearly 3,000 adult Americans collected during the NHANES 2003–2004 and NHANES 2005–2006 surveys. Individual data came from responses to demographic, socioeconomic and health-related survey questions, along with information accessed from medical records and clinical laboratory test results. Participants were asked to wear an accelerometer device at the hip for seven consecutive days, removing it only when sleeping, showering or swimming.

The average age the study group was 65.9, and all participants were between 50 and 84 years old.  While the gender proportion was nearly even — men made up 51% — a larger percentage of the men, 65%, died within five years of the study’s follow up efforts.

After studying each individual variable associated with mortality — including education, sedentary time, and ethnicity — the researchers concluded that the total measure of physical activity accumulated during each day was the strongest predictor of five-year mortality, followed by age and moderate-to-vigorous activity. When comparing the data of a person who died within five years and a person who survived, researchers said they were able to correctly rank the mortality risk using accelerometers 30% more accurately than using information about smoking status and 40% better than using information about whether a person suffered a stroke or had cancer.

With a focus on fragmented activity, researchers also collected data for two-hour spans throughout the day in order to look at patterns in physical activities. Their analysis showed that physical activity — or lack thereof — between noon and 2 p.m. was the highest predictor of mortality risk, outperforming more commonly considered risk factors such as diabetes, cancer and alcohol consumption.

The researchers caution that their study wasn’t designed to establish cause and effect, however, they did note that their data suggests that being more sedentary during the day is linked with higher mortality.

"The most surprising finding was that a simple summary of measures of activity derived from a hip-worn accelerometer over a week outperformed well-established mortality risk factors such as age, cancer, diabetes and smoking," says Ekaterina Smirnova, M.S., Ph.D., assistant professor of biostatistics at Virginia Commonwealth University and the lead author on the paper.

“While this study affirmed a link between physical activity and short-term mortality risk in an older population, the data don’t guarantee that one’s risk of mortality is going to be lower with more physical activity,” noted Andrew Leroux, a Ph.D. candidate at Johns Hopkins and co-author of the study report. “However, our findings do indicate that an accurate measure of physical activity is a more reliable way for doctors and patients to assess physical activity and intervene to increase it as a potential way to improve health.”

The researchers hope to use their data to help design clinical trials that could confirm the potential for physical activity to increase lifespan. One caveat to the study is that researchers aren’t able to distinguish sedentary behavior from sleep or if someone has removed the device.

Additional co-authors are Vadim Zipunnikov of Johns Hopkins, Quy Cao of the University of Montana and Lucia Tabacu of Old Dominion University.

No investigator reported any conflict of interest in the preparation of the study.