What Was Underlying a Young Dancer’s Painful but Seemingly Simple Knee Injury? 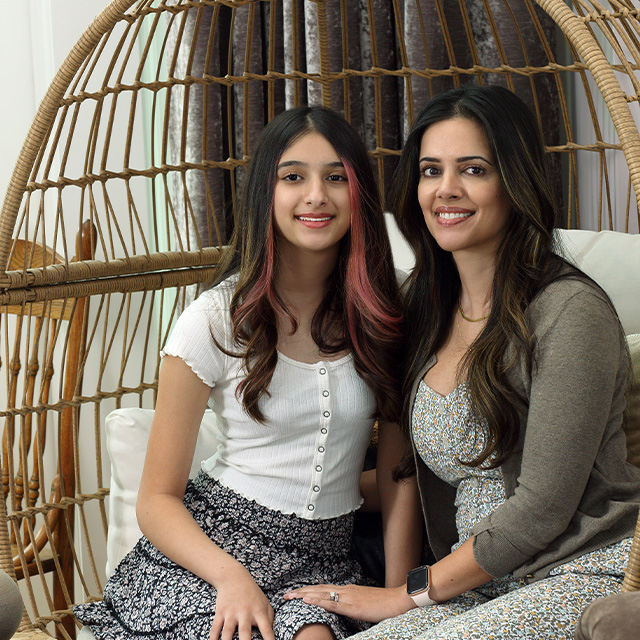 Rania with her mom, Shabina Ahmed, is back to dancing after treatment for complex regional pain syndrome.

Shabina Ahmed describes a cascade of events starting three years ago when then-10-year-old Rania and her twin brother were horsing around in their home and fell to the floor, he on top of her leg. He bounced back up; she sat there for a bit nursing her left knee, seemingly unable to stand up. She couldn’t and wouldn’t for several weeks.

“It seemed like a very minor injury at the time,” says Ahmed, “but she just didn’t get better.”

Ahmed, an endocrinologist with Johns Hopkins Community Physicians, explains that three weeks passed with no improvement in her daughter, who relied on crutches to get around. She took Rania to an orthopaedic surgeon, who ordered an MRI that revealed a bone contusion in her knee but not much else. The orthopaedist said she should feel better in another two weeks. She didn’t, and the orthopaedist referred Rania to physical therapy, which, after two months, got her back to bearing weight on her left leg.

“It was still super unclear what was happening, but she got back to walking, so we didn’t think that much of it,” says Ahmed.

Rania felt so much better that she tried out for an advanced dance class, where she found herself stressed competing with teens 16 and 17 years old. While performing some rolls on the floor, she hit her knee at the same exact spot of her injury and had to be carried out of the dance studio by the teacher. At home, the crutches ended up in a closet and Rania had to rely on a wheelchair.

“That’s when things really took off,” says Ahmed. “We realized we had a significant weakness that we couldn’t figure out.” 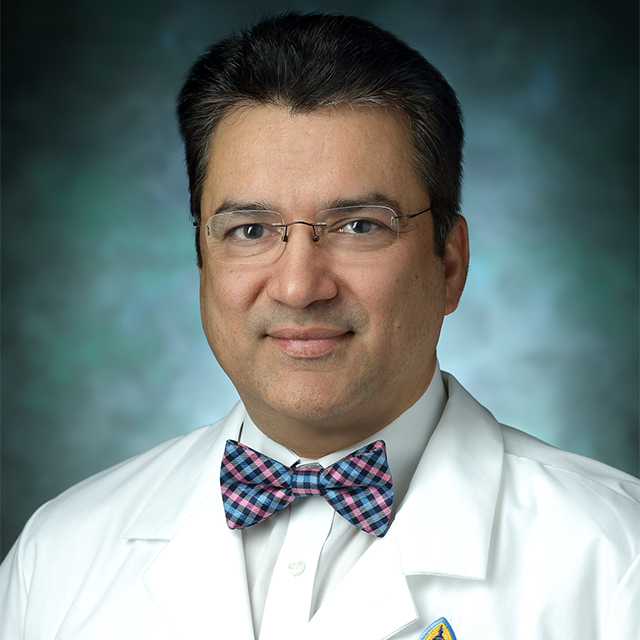 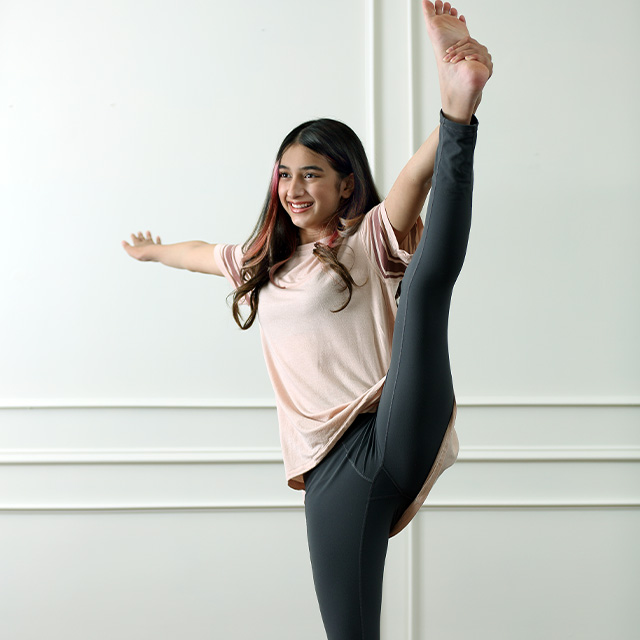 Slowly, over the next several weeks, Rania experienced increasing weakness and constant, excruciating pain, in her injured leg — so painful that the mere touch of a bed sheet over her knee was unbearable. Even hovering a hand over her daughter’s knee, says Ahmed, triggered pain. Her leg, at times, would turn blotchy and purple-hued.

“It was still a mystery,” says Ahmed, expanding her assessment of possible causes. “What were the strange things that could be happening to explain the weakness? Lyme disease, Guillan-Barre syndrome, myasthenia gravis…?”

Ahmed sought answers at an outside hospital, where Rania underwent more imaging and tests, which revealed no physical cause. An incorrect diagnosis of conversion disorder was given, a condition marked by nervous system symptoms that cannot be explained by medical evaluation. Ahmed was skeptical because she knew that while conversion disorder can result in loss of function it does not include pain among its symptoms.

“When we took her out of the hospital, we were basically told she was faking it,” says Ahmed. “We knew this was real, but the pain was so not understood. So, we were left without a clear diagnosis and felt really demoralized.”

Then, a breakthrough came from Rania’s outpatient orthopaedist who mentioned the concept of complex regional pain syndrome (CRPS), marked by prolonged pain and inflammation following an injury to an arm or leg. The orthopaedist recommended injection of a spinal nerve block next to the sympathetic nerve. Ahmed and Rania were initially hesitant, but got on board with the procedure.

“It was a scary thought, but at that point we were very desperate, so we agreed to do it,” says Ahmed. “The orthopaedist said it was diagnostic as well. It if worked, that meant it met the diagnosis of CRPS.”

Rania was “super brave” in undergoing the procedure and cooperating throughout it, says Ahmed. When it was over, within minutes, Rania was pain free. Also, the temperature of her leg went up and the natural color of her left leg returned, all signs that she did indeed have CRPS.

After another two months of physical therapy, Rania was walking again. Still, she had some functional disability and struggled going up stairs. Months later, she began suffering symptoms again, this time pain and weakness at the bottom of her left foot, along with anxiety and mood changes. She was back on crutches.

Ahmed was at her wits’ end until a Johns Hopkins colleague shared a similar story about her daughter and referred her to Irfan Suleman, director of the pediatric chronic interventional pain program at Johns Hopkins Children’s Center and medical director of the multidisciplinary pediatric chronic pain rehabilitation program at Kennedy Krieger institute. After a four-hour evaluation by members of the pain clinic’s team, Suleman’s team believed Rania met the criteria for CRPS, along with a diagnosis of adjustment disorder and anxiety due to her persistent pain. She was deemed a candidate for a multidisciplinary pain rehab program. Time for a fresh, noninvasive approach, Suleman concluded.

“I am a pediatric pain interventionist, but I don’t want anyone putting any more needles in you,” he told Rania. “We’re not going to do anything invasive. Trust me, we’re going to work on this together.”

“From that moment,” says Ahmed, “I could see Rania immediately liked him and trusted him.”

Suleman’s solution was a one-month intensive inpatient rehab admission in which Rania would work with members of the pain clinic team, especially behavioral psychologists and physical therapists, to uncover the source of the pain and how to cope with it. In the program she could practice deep breathing exercises, muscle relaxation, guided imagery, meditation and distraction techniques, among other skills, on a daily basis.

“I think it’s important for people with this disorder to learn coping skills,” says Rania. “Distraction works great for me.”

“It really did work,” adds Ahmed. “Dr. Suleman’s method really pushes the multimodal approach to treat CRPS. He never used narcotics, anything like that — the functionality came back because she was able to use these coping strategies. She went into the program in a wheelchair and came out walking.”

The functionality also came back because the physical therapy piece of the inpatient stay restored some of the muscle atrophy in her left leg from lack of use. Suleman measured a 75% improvement in Rania’s function and pain management over her inpatient stay.

Why is this condition so difficult to diagnose and treat effectively? Suleman explains that in CRPS the sympathetic nerve may become overactive and send inappropriate or false signals of pain to the brain. Over time, because the brain keeps receiving those signals, it starts to ignore them — like they don’t even exist — which explains why some patients with CRPS feel limb paralysis. Facing such symptoms, physicians tend to limit patients’ activities, which Suleman describes as counter to healing and reducing the patient’s pain.

“Bone bruises and contusions take some time to heal, which can make the central nervous system hypersensitive,” says Suleman. “Rania saw an orthopaedic surgeon, who put her in a boot, which, in patients with CRPS, over time can make things worse. Medical management and nerve blocks initially made things better, but then she got worse, back in a cycle of using crutches and a wheelchair again.”

Such challenging circumstances tend to increase anxiety and depression for these patients, Suleman adds, especially for a young girl who loves dance and found it hard to stop dancing.

Post-discharge, Rania continued to do well managing her pain, but — characteristic of CRPS — she suffered relapses. Suleman recommended a second stint in the hospital, which she completed in August 2020. At the same time, Souraya Torbey, a child psychiatrist and part of the pain team, was brought in to help manage her anxiety and mood.

“This time she was older, a little more mature, and got even more out of it,” says Ahmed.

Since that second discharge Rania has faced a couple of bumps, says Ahmed, but for the most part she has been walking and even running for the first time in three years. In January 2021, she started dance again and went to her first soccer practice since her knee injury.

“It’s pretty amazing considering where she came from and all that she went through,” says Ahmed. “Through this whole process, Dr. Suleman has been one of those guiding lights for us.”

“Rania is not using crutches, a walker or wheelchair, she is dancing,” says Suleman. “Her sleep has improved. She still has some pain, which will get better with continued use of her coping strategies, physical therapy and time.”