What Was Underlying This Teen’s Sudden Fatigue and Muscle Weakness? 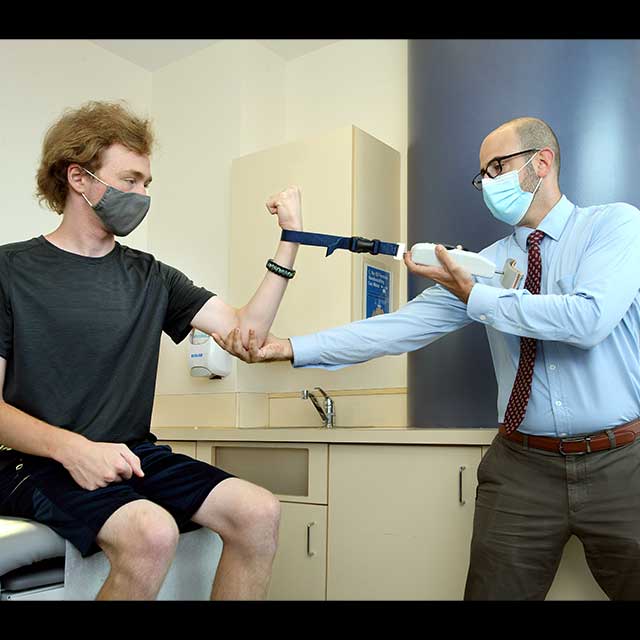 In clinic, pediatric neurologist Matt Elrick tests Eric’s strength, much of which he recovered with immunosuppressant therapy.
"This was a very rare type of myasthenia gravis with myositis overlap syndrome, where you have abnormalities like a tumor in the chest.” – pediatric surgeon Clint Cappiello.

A few days after Thanksgiving 2020, Eric Lang suddenly felt muscle weakness and fatigue. He also started losing weight rapidly. A visit to the emergency room uncovered inflammation in his arms but no clear cause. Worse, two weeks later, the 17-year-old had difficulty breathing and was admitted to Johns Hopkins Children’s Center for what would become a four-week stay.

“For the first 10 days, he was on a ventilator. He couldn’t move, he couldn’t breathe,” says Eric’s mother, Sue Lang. “This was a pretty wild time when they were trying to figure out what was going on.”

Among the suspects were diabetes, Lyme disease, myositis — muscle inflammation triggered by an autoimmune disease — and an infection or a virus taxing Eric’s entire body. COVID-19 came up, but tests were negative. Myasthenia gravis (MG), a rare chronic autoimmune disease in which antibodies attack the connections between nerves and voluntary muscles, was also on the list of possible diagnoses.

“It was an unusual presentation for myasthenia to begin with, and required a number of people from different disciplines to sort out what was going on,” says pediatric neurologist Matthew Elrick. “And then a lot of different pieces came together at once.” 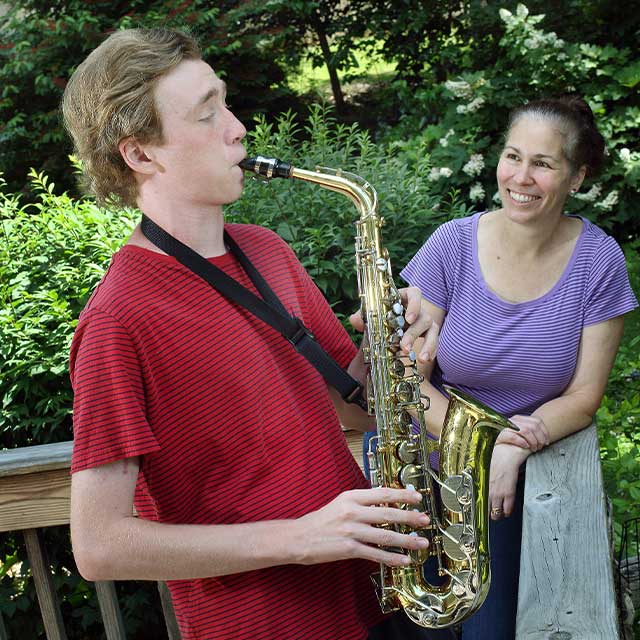 Playing the saxophone is therapeutic for hand and finger control, says Eric, with his mom, Sue Lang..

After consulting with fellow pediatric neurologists Thomas Crawford and Jessie Nance, Elrick ordered lab tests to confirm or disprove MG. He also scheduled Eric for electromyography (EMG) to detect neuromuscular abnormalities. The test did show inflammatory muscle injury which, coupled with lab results revealing the antibody for myasthenia gravis, led the trio down the path to a possible autoimmune disorder causing both myositis and myasthenia gravis.

Then, another clue came when a chest X-ray and computerized tomography (CT) imaging revealed a mass in Eric’s upper chest. At first, pediatric surgeon Clint Cappiello didn’t know what to make of it.

“It was sort of in an atypical position radiographically,” says Cappiello. “When we got in there, it was hanging off to the side just off the right atrium, near the phrenic nerve, which is high-priced real estate.”

Cappiello suspected the 8-centimeter growth was associated with myositis, although another possibility was a thymoma, a generally benign tumor that originates from the epithelial cells lining the thymus. Thymomas, which grow slowly and usually do not spread, are associated with myasthenia gravis. According to the Myasthenia Gravis Foundation of America, between 10% and 15% of people with MG will have a tumor in their thymus.

Next, the issue was whether to biopsy the mass, which risked injuring the phrenic nerve the only source of motor innervation to the diaphragm — or resect it to reduce that risk and achieve a safer biopsy.

Diabetes, Lyme disease, a mysterious virus, or a rare autoimmune disease that has neuromuscular consequences? Learn about the diagnosis of this @HopkinsKids patient. Click to Tweet

“When you take the phrenic nerve, you paralyze the diaphragm, potentially permanently,” says Cappiello. “In such cases, there are options to do a nerve graph or a diaphragmatic pacer for the whole diaphragm, but that would require a second operation, and the patient was already suffering from pediatric respiratory failure.”

Considering these factors, Cappiello believed resection with pathological diagnosis was the safest decision because it removed the risk of doing a biopsy potentially through the chest and lung that could spread whatever the mass was, complicating long term treatment. Once the potential risks and benefits were reviewed, the family agreed.

“We chose to resect initially thinking it was not a thymoma, but after we took it out, the pathologist made the final diagnosis,” says Cappiello. “This was a very rare type of myasthenia gravis with myositis overlap syndrome, where you have abnormalities like a tumor in the chest.”

Then, for Eric and his mother, everything changed.

“The myasthenia gravis was kind of hiding, with his immune system acting so aggressively,” says Sue Lang. “Once they found the thymoma, which wasn’t very easy to find, that’s when everything clicked into place.”

The antidote for MG, Elrick explained to Sue Lang at Eric’s bedside, is the cholinesterase inhibitor neostigmine. “Do you want to watch it work?” he asked.

“Eric was still on the ventilator,” says Lang. “They gave it to him intravenously and he responded immediately — he started breathing on his own. It was really amazing to see that work.”

A second EMG by Elrick and Crawford confirmed myasthenia and showed improved voluntary muscle responses to the neostigmine. As Eric continued to receive immunosuppressant therapy, he was able to be extubated and became gradually stronger.

Elrick says to diagnose and manage a complex disease like MG, you need “a large team of people from different perspectives, where you can put your heads together and really think critically about what was causing the patient’s weakness — the benefit of how we do things here. Also, the flexibility to tailor, through the diagnostic process, the treatment for the individual patient, especially for a disease that can be so variable and unpredictable.”

How is Eric doing since his discharge?

“Well, I have all of my senses,” says Eric, now an 18-year old who will be off to Virginia Tech in the fall. “I’m doing things normally, walking normally, so I’m pretty good.”