For 16-year-old Gabrielle Risby, a student-athlete from Antioch, Tennessee, the symptoms that led her to Johns Hopkins Children’s Center were fatigue and nausea at basketball practice and emesis whenever she ate the slightest thing.

“I felt like my food was piling up and never making it to my stomach,” says Gabrielle. “I was throwing up all day every day, every time I ate. I didn’t know what it was.” 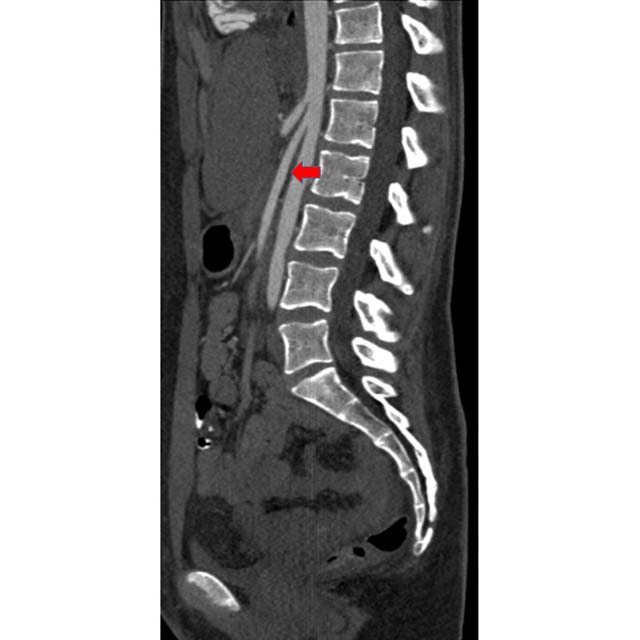 In the image above, the red arrow marks the compression of the duodenum between the aorta and the superior mesenteric artery.

Was it an eating disorder, as her schoolmates deduced due to Gabrielle’s constant vomiting and sudden weight loss? In her heart, Gabrielle knew an eating disorder was not the culprit though she felt embarrassed and tried to hide her symptoms. She had this sense of fullness just below her esophagus through elementary school and middle school, but now it was worse with the nausea, sharp abdominal pains and numbness in her arms and legs. 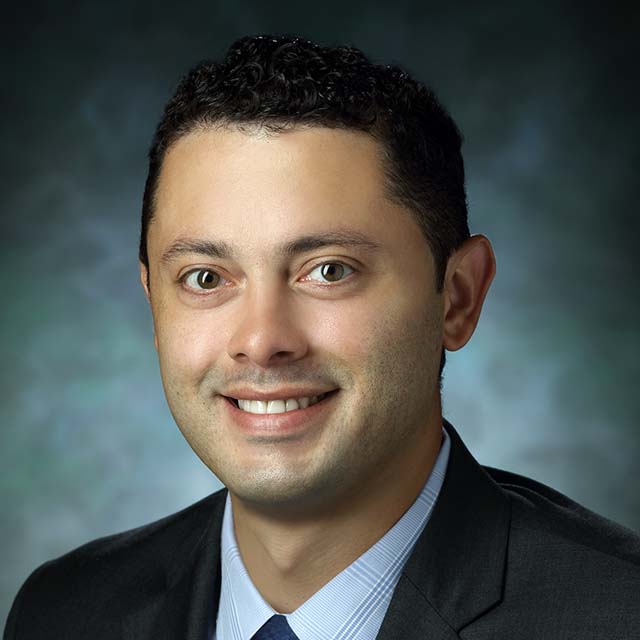 “No more hiding symptoms” became Gabrielle’s mantra—she knew she had to find out what was going on but was unsure where to go. Then she fainted at school and the decision was made for her at the local Emergency Department (ED), where lab tests showed dehydration and hypokalemia, or low levels of potassium. Marrying her history with her labs, physicians there also suspected an eating disorder and began to treat it accordingly. Gabrielle was stunned.

“She was crying, telling the doctors it’s not an eating disorder, but they were convinced it was,” says Gabrielle’s mom, Joan Risby.

Despite treatment for an eating disorder, including dietary changes and a feeding tube, over the next few months Gabrielle continued to suffer daily emesis, severe dehydration and weight loss—50 pounds in three months—resulting in several more ED visits and three hospital admissions. Frustrated and prompted by her high school athletic coach, Gabrielle combed medical websites for the cause of her symptoms. Through her search, she learned that a CT scan of her stomach might reveal the answer.

“At Gabrielle’s insistence,” says Joan, “they finally performed an imaging test of her stomach and when they found what it was, they said they had heard of it before but didn’t know how to treat it.”

“It” was superior mesenteric artery syndrome, or SMAS, which occurs when the duodenum is compressed between two arteries—the aorta and superior mesenteric artery—resulting in partial or complete blockage of the duodenum. Symptoms may include abdominal pain, nausea, vomiting and weight loss, all experienced by Gabrielle. Interestingly, the most common cause is an eating disorder that leads to the loss of fatty tissue that surrounds the mesenteric artery, although anatomic abnormalities can also play a role. Although SMAS is not considered an inherited condition, reports of familial cases and affected identical twins suggest a genetic predisposition in some people.

Learning that surgery was an option, Gabrielle got back on the internet. In her search, however, she found only two children’s hospitals that offered surgical treatments for SMAS. Johns Hopkins Children’s Center was one of them. After hearing her story and reviewing her records, pediatric surgeon Alejandro Garcia was on board.

“People who have SMAS are often told they have an eating disorder because they’re constantly vomiting and treat it as a psych issue when in reality they can’t pass any food,” says Garcia. “We got the CT scan and it was convincing for the radiologist that it was an anatomic problem and for us that surgery was reasonable,” he adds, noting that Gabrielle’s mesenteric artery was sharply angled and pinching off her duodenum, blocking the passage of food.

Surgeries to treat SMAS include the Strong’s procedure, in which the duodenum is re-positioned to the right of the superior mesenteric artery, and gastrojejunostomy, in which the jejunum is joined directly to the stomach. For Gabrielle, Garcia recommended a novel, less-invasive approach called laparoscopic duodenojejunostomy, during which—through three tiny incisions—the surgeon makes the small intestine bypass the duodenum.

“We connect it to the intestine a little further downstream so that food can get past that area that’s kinked off,” says Garcia. “Of the three procedures recommended for SMAS, this one has the least amount of complications.”

What was Gabrielle’s outcome?

“I told her mom there was probably a 50 to 70 percent chance this surgery would help, and if it did help, her symptoms would gradually improve over time,” says Garcia. “But two days later she’s in the lobby eating ice cream, so for me that was more dramatic than I had anticipated.

She got better so quickly, which makes me think her blockage was a lot worse than we thought.”

Gabrielle could not be more gratified.

“It was crazy the first time food hit my stomach—I had my first bowel movement in forever and it felt so good to have food actually process through my body,” she says. “I feel great, like a brand new person, physically and mentally.”

Gabrielle adds that she hopes her experience raises awareness for other patients who may be born with a constricted duodenum and not one formed in adolescence by an eating disorder. “There may be a lot of other people who don’t feel hope because they can’t figure out what it is and get treated for eating disorders,” says Gabrielle. “I knew from the start something was wrong and what it felt like. It was a real awakening.”