When Can PSA Testing Be Stopped After Prostatectomy?

IS IT EVER SAFE TO STOP PSA TESTING? YES! REASSURING EVIDENCE FROM BRADY STUDIES PROVIDES SOME GUIDELINES.

You’ve done it for so long, and thank goodness, it has always come back undetectable. Sometimes you wonder if maybe you could stop taking the yearly PSA test; but then again, you’ve read that cancer can come back many years after a prostatectomy. Is it ever safe to stop PSA testing? 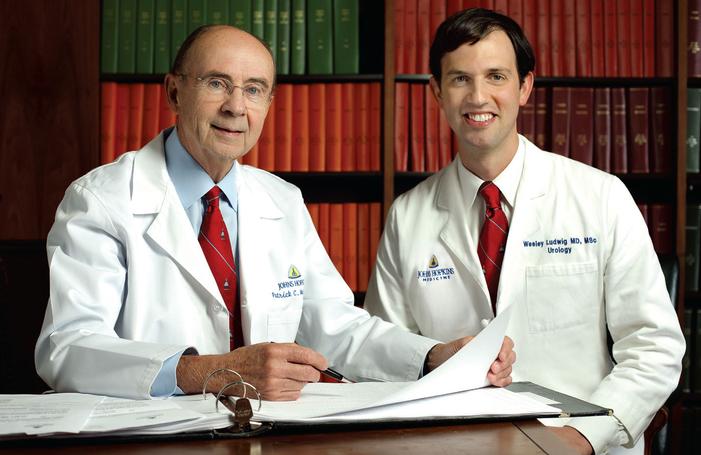 Walsh and Ludwig: Studied results of more than 700 Brady prostatectomy patients whose PSA levels have remained undetectable for 20 or more years.

Yes! Reassuring evidence from Brady studies provides some guidelines. Several years ago, urologist Stacy Loeb, M.D., now on the faculty at New York University, examined Hopkins prostatectomy patients who had an undetectable PSA at 10 years after surgery. With further follow-up, she reported that recurrence was very rare for men with low-grade (Gleason 3 + 3) disease, and not a single man developed metastatic disease after 10 years. She suggested that men with low-grade disease could reasonably stop testing if their PSA levels remained undetectable for 10 years.

But what about men with intermediateor high-risk disease? There remains “no standard practice regarding when PSA testing can be stopped for these men who have an undetectable PSA level over longer periods of time,” says Patrick C. Walsh, M.D., University Distinguished Service Professor of Urology. Walsh was senior investigator in a new study that looked at long-term PSA levels of more than 700 Brady prostatectomy patients whose PSA levels have remained undetectable for 20 or more years of follow-up. The other investigators include Wesley Ludwig, M.D., biostatistician Zhaoyong Feng, Bruce Trock, Ph.D., and Elizabeth Humphreys.

Ludwig, Brady resident and the study’s lead author, notes that of the men with intermediate- and high-risk disease, a very small number (2.3 percent) developed prostate cancer recurrence, only a single patient developed metastatic disease, and none died of prostate cancer.

“We found that the majority of men who had detectable PSA developed it within two years of their radical prostatectomy, and the likelihood decreased every five years,” Ludwig reports. Previously, Brady investigators have shown that the likelihood of having PSA return after 15 years is only 1.5 percent.

The men most likely to have a delayed return of PSA were those who had an elevated PSA at the time of radical prostatectomy, higher clinical and pathologic stage, and positive surgical margins. The good news is that even with a return of PSA, these men have excellent chances of survival.

With the longer follow-up period in this study, the investigators were able to analyze risk from 20 to 30 years. Because the risk of recurrence is so low after 20 years of undetectable PSA, and because it takes an average of eight years after PSA reappears before metastasis to develop, “we suggest that PSA testing can be stopped at 20 years for men with an undetectable PSA and intermediate or high-risk prostate cancer,” Walsh says.