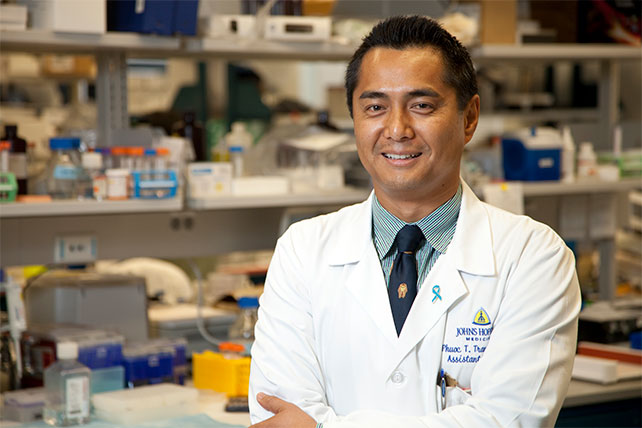 “As men are approaching low-volume metastasis, there’s a perfectly reasonable period in which you can ask the question: Does local therapy change the metastatic process?”

Last year in Discovery, we reported on the encouraging results of Tran’s ORIOLE trial (Observation vs Stereotactic Ablative RadiatIon for OLIgometastatic Prostate CancEr). In that trial, men with oligometastasis – a few tiny bits of cancer outside the prostate area – were treated with stereotactic radiation therapy (SABR). Building on those results and promising early results of ORIOLE’s successor, the RAVENS trial (RAdium-223 and SABR Versus SABR for oligomEtastatic Prostate caNcerS) at treating the early spread of prostate cancer, Tran is now looking for a better early warning test to detect it.

“Gleason score and PSA alone are not enough to accurately identify men with more biologically aggressive disease,” he says. Better biomarkers are urgently needed, and Tran and his NRG Oncology colleagues may have found one: the Decipher genomic classifier (GC), developed from tissue samples of prostatectomy patients. Tran’s group recently became the first to validate the GC in a national study, the NRG/RTOG 9601 Phase 3 placebo- controlled, randomized trial, in which 760 men with a returning PSA after prostatectomy received salvage radiotherapy (sRT) plus around two years of hormonal therapy with bicalutamide (Casodex).

Being able to predict the risk of future metastasis is especially important in men receiving early sRT who have a very low but rising PSA – below 0.7 ng/mL. “Our study demonstrates that among men receiving earlier sRT, those with a higher GC had more than an 11-percent improvement in 12-year distant metastasis, and nearly a 5-percent improvement in overall survival from the addition of hormonal therapy. The GC was able to predict which men were more likely to develop distant metastasis, and to die of prostate cancer – and thus, which men could really benefit from the addition of bicalutamide to sRT.”

Soon, better imaging – particularly, PSMA-PET – “will undoubtedly help determine the true state of tumor burden, particularly in newly diagnosed men when the PSA is rising but is less than 10,” he continues. “Conventional imaging really is not useful when the PSA is 5 or 10.”

Tran believes the number of men with oligometastasis in the U.S. is huge – “much higher than the number of men diagnosed with upfront metastatic prostate cancer each year.” For now, “systemic therapy is the standard of care for patients with metastatic disease. But in that gray area of biochemical recurrence (PSA creeping back up after prostatectomy or radiation of the primary tumor), as men are approaching low-volume metastasis, there’s a perfectly reasonable period in which you can ask the question: does local therapy change the metastatic process?” That was the question behind the ORIOLE trial.

“If this were not a spectrum, and if local therapy could not alter that natural history of metastasis, then we shouldn’t be able to affect progression with local therapy alone. Patients should progress no matter what. We did not see that” in the ORIOLE trial, nor in early results so far of the RAVENS trial. “Obviously, stronger evidence is needed,” but Tran believes that all evidence points to this conclusion: “the course of early metastasis is not set in stone.”