“You’re Not Going to Die From This.” 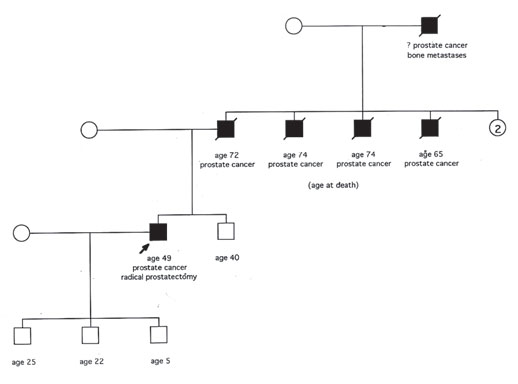 Odom: Prostate cancer is more hereditary than any other cancer. This figure shows the family history of a 49-year-old patient (arrow) seen by urologist Patrick Walsh in the 1980s. The man told Walsh that his father, his father’s three brothers, and his grandfather all died of prostate cancer. This case ignited discovery in the little-known field of prostate cancer genetics at the Brady and began a 30-year hunt for the genes responsible.

Chad Odom knew he was at a higher risk for prostate cancer because his dad had it at age 60. But he never expected to be diagnosed with it at age 46. In fact, he put off getting a biopsy.

Odom got his first PSA at age 45, and it was 4.4 – much higher than it should be. (Brady researchers have established that a PSA for a man in his forties should be 0.6.) His urologist said, ‘Yep, we need to do a biopsy right now,’” Odom recalls. “It was not what I wanted to hear, of course. So I went to another urologist” in his hometown of Greenville, S.C. “He did a percent-free PSA test and said, ‘You’ve only got between a 5- and 10-percent chance of having prostate cancer. Let’s wait two or three months and do another test.’ I said, ‘Yeah, let’s wait.’ Then we did a biopsy and I had cancer – but luckily, it was caught very early.

“As soon as I found out I had it, I called Dr. Walsh, because my dad read Dr. Walsh’s book 14 years ago,” when he was diagnosed with prostate cancer. Odom got the book, Dr. Patrick Walsh’s Guide to Surviving Prostate Cancer, too. “Reading the book actually made me feel better. When you’re diagnosed with prostate cancer, you think it’s the end of the world. Luckily, my dad was there, and he said, ‘You’re not going to die from this.’ That comforted me even more. From the book, I could see that I’m in the curable category, thank goodness, so I should be fine.”

Odom, an entrepreneur whose company, Encore Container, produces, refurbishes and recycles plastic containers for industrial use and is one of South Carolina’s fastest-growing companies, wanted to give back. Three months after his surgery, Odom made a generous donation to the Prostate Cancer Discovery Fund, which supports many research projects and areas of need related to prostate cancer across the Brady. “The care from beginning to end at Johns Hopkins really was incredible,” for which he is grateful.

But he is also thinking of the future: he wants to help find a cure. Odom has two children, a daughter and a son. The family history worries him. His son is at a higher risk to have prostate cancer, and because William Isaacs, Ph.D., the William Thomas Gerrard, Mario Anthony Duhon and Jennifer and John Chalsty Professor of Urology, and other Brady scientists have shown that the prostate cancer risk can be passed from either the mother or father, his daughter’s sons may be at higher risk, as well. In December 2016, Odom made a generous five-year pledge to the Brady to support the research of Isaacs and Ken Pienta, M.D., the Donald S. Coffey Professor of Urology. (Pienta’s work is featured in our cover story.)

Back home in South Carolina, Odom is trying to raise awareness about prostate cancer. “I tell everybody I know,” he says. “Have you had your PSA checked? Have a physical. Get that blood work done. It’s worth it.”