Your Weight History May Predict Your Heart Failure Risk 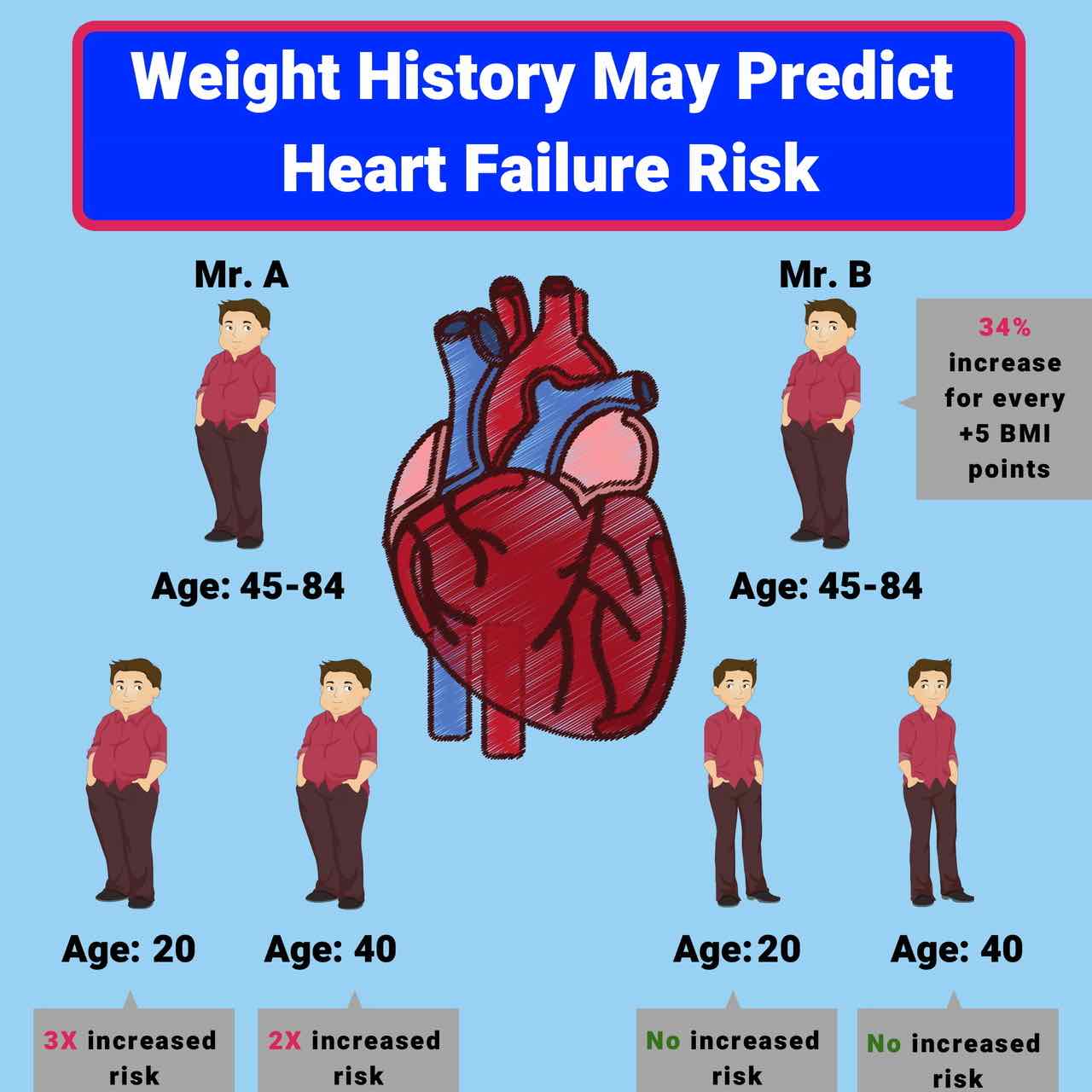 People with lifetime obesity like Mr. A are at a much higher risk of heart failure than the newly obese at an older age like Mr. B. Obesity at any age can raise heart failure risk though. For every five-point increase in BMI, a person’s heart failure risk increases by 34%. Credit: Johns Hopkins Medicine/Kristen West

In a medical records analysis of information gathered on more than 6,000 people, Johns Hopkins Medicine researchers conclude that simply asking older adult patients about their weight history at ages 20 and 40 could provide real value to clinicians in their efforts to predict patients’ future risk of heart failure, heart attacks or strokes.

In a report published Nov. 14 in the Journal of the American Heart Association, the investigators say the younger-weight question is potentially a cost-efficient, high-value “ask” likely to help physicians decide how to advise and treat their older patients, particularly now that many people change primary care physicians throughout their lives, and lifelong health records may not transfer. Asking this simple question about prior lifetime weights provided prognostic information about a person’s heart failure risk that was incremental to their measured weights at older ages and other measured traditional heart disease risk factors.

“We’ve known that the longer a person is obese, the more it becomes problematic by increasing their heart failure risk,” says Erin Michos, M.D., M.H.S., associate professor of medicine at the Johns Hopkins University School of Medicine. “That is why measuring a person’s weight at older ages may not tell the whole story about their risk. There’s now more evidence that newly obese people are in overall less danger. Our findings emphasize the importance of lifelong maintenance of a healthy weight, as greater cumulative weight from young adulthood is more risky to heart health.”

“We already routinely measure weights during a patient’s clinic visit to make health recommendations, but we think adding this low-tech question about their prior weight histories can further help direct clinical care,” she adds. “While we acknowledge that self-reported weight history is imperfect, at the very least, asking the question sparks patient reflection and self-motivation to get back to healthier weights from their younger ages.”

Heart attacks, strokes and other cardiovascular diseases remain the No. 1 killers of Americans. Heart failure, also known as congestive heart failure, is a condition marked by a gradual weakening and stiffening of the heart muscle, diminishing its ability to pump blood. Physicians routinely attempt to assess risks for heart disease and heart failure as patients age with measures of blood pressure, cholesterol, exercise levels, family history, diet and weight, Michos noted. Although a single weight measurement in an older adult is helpful, she says, weight history is even more informative, and the new study was in part designed to identify a practical way of getting it that would be considered informative enough to add to clinical care.

For the study, the researchers used data already gathered on 6,437 participants in the Multi-Ethnic Study of Atherosclerosis (MESA) recruited between 2000 and 2002 who were age 45 to 84 at time of enrollment into the study. Participants were followed an average of 13 years, and lived in six U.S. communities: Baltimore, Maryland; Chicago, Illinois; Forsyth County, North Carolina; New York City, New York; Los Angeles County, California; and St. Paul, Minnesota. On average, they were 62 years old at the study’s start. Almost 53 percent of the participants were women. About 39 percent of participants were white, more than 26 percent were African-American, 22 percent were Hispanic and a little more than 12 percent were Chinese-American.

Each participant filled out a survey that reported their weight history at age 20 and 40. Their weights were further tracked during the study period using measurements from a standardized scale over five different in-person visits. All weights were converted to body mass indexes (BMI) by dividing the weight by the square of height. A BMI less than 25 kilograms per meter squared was considered normal, while a BMI between 25 and 30 was considered overweight, and 30 and above was considered obese.

By the end of all participants’ last visit, 290 people had experienced heart failure, and 828 experienced cardiovascular disease events such as heart attacks, stroke and or death as determined by participant and family interviews and patient medical records.

As expected, Michos says, the standard measured weights taken at clinic visits during the 13-year study period were associated with later heart failure risk, with a 34 percent increased likelihood of heart failure for every 5 kilograms per meters squared increase in BMI, after accounting for other established heart disease risk factors such as age, smoking, physical activity, blood pressure and diabetes. But then her team found that even after taking into account these current measured weights at older ages, that having a self-reported history of obesity at age 20 (144 participants) was associated with a more than threefold risk of heart failure, and having a history of being obese at age 40 (716 participants) doubled the risk compared with people who had a BMI in the normal range at those ages.

“Our study confirms that maintaining a normal weight over the lifespan is the most ideal, and that when and for how long a person becomes obese are highly informative in assessing heart disease risk in older adults,” says Michos.

Michos cautioned that the new study was designed to look at associations between self-reported lifetime weights and heart disease risk over time, and not determine cause and effect or attempt to determine the accuracy of patients’ recall of their weight at young ages. Patient self-reporting can result in bias or imperfect memory, but the researchers believe most older adults have reasonably accurate recall of their younger adult weight. Their study findings suggest that even with these known limitations of weight recall, that simply asking about weight history was helpful in risk assessment. Right now, clinicians just don’t routinely ask about a person’s weights at key life points such as young- and mid-adulthood, Michos says, but it is so easy to do.

Michos says that we need to investigate how we can incorporate this ask (about lifetime weight recall) into electronic health records and into clinical practice.

About 1 in 3 deaths in the U.S. are due to heart disease, according to the American Heart Association. About 92 million American adults are living with some form of cardiovascular disease. About 5.7 million people in the U.S. live with heart failure, and more than half a million are diagnosed each year. More than half of people with heart failure will die within five years of diagnosis, according to the Centers for Disease Control and Prevention.

The authors have no conflicts of interest to disclose.