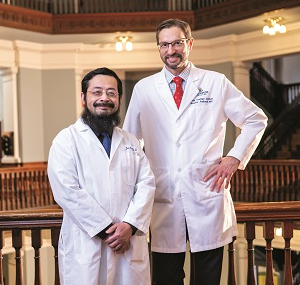 How important is seed money? Priceless! Our cover story, on Martin Pomper’s PSMA-targeting research, is an excellent example.

That research got its start with one of the first-ever awards from the Patrick C. Walsh Prostate Cancer Research Fund. So did Samuel Denmeade’s early work on BAT. Since its inception in 2005, this remarkable Fund – made possible by the tremendous generosity of our patients and friends – has awarded millions of dollars to Johns Hopkins scientists in every discipline with good ideas worth pursuing that can help us understand more about prostate cancer. Their research has produced better ways to detect, treat and prevent the disease.

Applications are reviewed by a Scientific Advisory Board composed of noted Hopkins scientists and lay members. This year’s awards are even more meaningful than usual, because they support dedicated research that has persisted in the midst of a global pandemic. These scientists should be proud, and so should you: without you, their work wouldn’t be possible!

Sarah Amend, Ph.D., believes the key to defeating metastatic cancer is to outsmart its “lynchpin of resistance,” polyaneuploid cancer cells (PACCs), which put them- selves into a dormant state to survive all known therapies. With the PCW Award, Amend is working to design innovative strategies to eliminate the PACC state. For more on PACCs, see Insights into Aggressive Cancer: Cellular Garbage Strikes and Sneaky Sleepers.

Testing a New Class of Drugs

Osmotic protoxins are new drugs custom-designed to seek out and kill only one target: prostate cancer cells. “These drugs are engineered to be inactive when traveling around the body,” says scientist Nathaniel Brennen, Ph.D., “significantly reducing side effects and toxicity to normal tissue. They activate when they reach prostate cancer cells, and kill them in a specific and highly efficient manner.”

How do they do that, exactly? By poking holes in the prostate cancer cell membrane. “This causes the cancer cells to pull in water, swelling until they burst open in a matter of hours – a process known as osmotic lysis.” Brennen knows these drugs are safe; scientist John Isaacs, Ph.D., and medical oncologist Samuel Denmeade, M.D., tested the first generation of this class of drugs, PRX302 (Topsalysin), on more than 500 patients in clinical trials for localized prostate cancer and BPH.

But “unfortunately, PRX302 can only be used as a local injection,” and metastatic cancer requires systemic therapy – an IV infusion that can travel throughout the body, looking for outlying cancer cells. “To overcome this limitation, we have engineered a second-generation version, known as APPX42, in which the protoxin is bound to human serum albumin,” explains Brennen. Like its predecessor, this protoxin is activated when it reaches prostate cancer cells. Because PRX302 has already proven safe in men with prostate cancer, Brennen expects APPX42 to begin clinical testing soon.

Arthur Burnett, M.D., is a pioneer in the study of the nerves involved in erection. In animal models, he has shown that erythropoietin (EPO, a hormone that helps make red blood cells and raises hemoglobin levels, which increases blood oxygen), can help facilitate erection recovery after radical prostatectomy. “But no treatments have been established at the clinical level,” he says. “EPO’s therapeutic potential as a neuroprotective agent has been shown to be promising in men,” but the FDA has been reluctant to approve it because of side effects associated with taking the drug for a long period of time to treat chronic conditions. Burnett believes these side effects could be avoided by a limited use and proper dosage of this agent; however, EPO’s role in the treatment of erectile dysfunction (ED) remains uncertain.

Another question: could EPO be made more effective in restoring potency and urinary control when combined with another agent – viable cryopreserved umbilical tissue (VCUT)? Burnett believes it could. “Our hypothesis is that this combination will increase the therapeutic benefit beyond the effect of either agent alone, based on their complementary, diverse neuroprotective mechanisms of action.”

Burnett will conduct a prospective randomized, double-blind, placebo-controlled, two-arm study designed to assess erectile function, urinary continence, and health-related quality of life. “We expect a gradual increase in erectile function and urinary continence postoperatively from baseline. This research could provide a meaningful advancement in quality of life for patients undergoing radical prostatectomy.”

“Much like modern computers, both normal and cancer cells have two competing, but essential tasks: to store massive amounts of data (such as DNA-encoding genes) and to access data,” says Jonathan Coulter, Ph.D., M.H.S. However, there are key differences, and here’s a big one: prostate cancer cells arrange genetic data differently than non-cancerous prostate cells, and “these profound alterations are likely drivers of disease.”

Coulter’s work suggests that being able to control the BAF complex could suppress the ability of prostate cancers to grow, adapt, and survive. He is beginning to describe the dynamic BAF complex assembly, and to characterize the specific roles these complexes may play in both growth of prostate cancers and their responses to therapies.

Slowing Down the Energizer Bunny

Innovative research from pathologist Angelo M. De Marzo, M.D., Ph.D., and colleagues may lead to a new way to target prostate cancer: by slowing down the cancer cell’s battery pack– in effect, turning the Energizer Bunny into a slowpoke.

Cancer cells and normal cells have a battery, or power plant, called mitochondria. These mitochondria have their own DNA, and mitochondrial function is regulated by the copy number of mitochondrial DNA (mtDNAcn), which can be difficult to quantify. Recently, De Marzo and colleagues in his lab, Jiayu Chen and Qizhi Zheng, M.D., along with a longtime collaborator, Srinivasan Yegnasubramanian, M.D., Ph.D., developed a novel method to quantify mtDNA in specific cell types. They published an initial version of this method in the American Journal of Pathology, and presented later findings at the 2021 meeting of the American Association for Cancer Research.

In subsequent research, they found a direct correlation between the levels of mtDNAcn and dangerous cell changes: “We found elevated mtDNA in high-grade prostatic intraepithelial neoplasia (HGPIN) a known precursor to prostate cancer,” says De Marzo. “Further, mtDNAcn was increased in prostate cancer, and even more so in metastatic prostate cancer. We implicated MYC, an oncogenic transcription factor, as a driver of these increases.”

The next steps include testing the hypothesis that increased mtDNA is a result of overexpression of MYC, “and whether this increase is required for the development of prostate cancer.” If this is the case, then inhibiting mtDNA replication with mitochondrial blockers might not only provide a novel approach to treating prostate cancer, but perhaps pancreatic and colon cancers, as well.

William Isaacs, Ph.D., and colleagues have been working on understanding the molecular basis for hereditary prostate cancer (HPC) for nearly 30 years, and have built a priceless database of germline DNA samples from men with prostate cancer, with and without a family history of the disease. You can read more about this research in The Genetics of Higher Risk.

“If we are to have a reasonable chance to find gene mutations which are important to developing prostate cancer, and – equally important – to find genetic markers which predict treatment response, we need to cast a wide net over a large number of cases,” he says.

The problem: the more cases, the more data – much more. “To date, we have generated over 40Tb, or 40,000,000,000,000 bytes of raw sequencing data,” says Isaacs, who will be overseeing a bioinformatics expansion “to put in place a well-organized, efficient and informative genomic data handling system. “Such a system will greatly increase our chances of finding genetic clues as to why some men develop and die from prostate cancer. It will also help us identify men at risk before cancer becomes incurable – and may even provide a basis for preventing this disease.”

Scientist Janielle P. Maynard, Ph.D, and colleagues have identified a new mechanism that powers prostate cancer metastasis: a receptor called P2X4. “P2X4 belongs to the P2 purinergic receptor family, which is commonly upregulated in cancer and is associated with worse outcomes,” she says. “However, until now, the expression and function of specific P2 receptors in prostate cancer remained undefined.”

In Maynard’s previous research, she zeroed in on P2X4 receptors on prostate cancer cells in progression and metastasis. Then she expanded her study to look at the tumor microenvironment (TME); specifically, how the body’s immune cells interacted with this receptor. “Among the immune cells, we identified P2X4 positive (P2X4+) neutrophils and macrophages,” she says. She is looking to characterize P2X4 receptor expression in the TME, to determine what these receptors do “specifically on macrophages and neutrophils,” and in mice, to determine “whether loss of P2X4 receptor expression on macrophages and neutrophils affects how tumors initiate, progress, or metastasize.” P2X4-targeting drugs are already being investigated as treatments for other conditions.

What are the keys to success in active surveillance (AS) for prostate cancer? There are two: one is choosing good candidates. “We only enroll men with a low risk of progression,” says urologist Christian Pavlovich, M.D. The other is careful monitoring: “Our patients are closely followed with serial exams, PSAs, prostate MRIs, and prostate biopsies.”

Over time, the AS Program at Johns Hopkins – one of the oldest and largest in the world – has developed a predictive model, “using relatively complex biostatistical methods and incorporating data from men who have been in the program over its many years. Our model uses age, PSA and biopsy information obtained over time to predict a man’s risk of progression to higher grade (more aggressive) cancer, so that treatment can be instituted before the cancer has spread outside the prostate.”

Pavlovich believes now is the time to improve this model, “by incorporating MRI information that patients obtain every few years, providing even more precise and accurate information to inform men when their cancer appears to be progressing, so they can be treated while they’re still in the window of curability.”

Jun Luo, Ph.D., began looking for a more precise urine test for prostate cancer for a very good reason: “Among the roughly one million prostate biopsies performed annually in the United States alone, the majority find no cancer. In addition, prostate biopsies often result in the diagnosis of clinically insignificant cancers, contributing to prostate cancer overtreatment.”

What really need to be detected are the clinically significant cancers that, if not treated, will spread and may become lethal. There are commercial urine tests, but they use what Luo describes as a “grind-and-bind” approach, involving nucleic acid amplification, that has technical limitations. “A cell-based test, in which a cancer cell can be definitively identified under a microscope, would overcome such limitations, and also achieve high specificity in cancer detection if cancer cells can be visualized.

With urologist Christian Pavlovich, M.D., Luo validated this method and found it “enabled robust detection of malignant prostate cells in post-DRE urine sediments.” “The ability to directly visualize cancer cells in urine cytology specimens is a key advantage. We believe the test could be implemented in CLIA- or CAP-certified labs, given its capacity to predict significant cancer on biopsy with high specificity.”

In further research, he and Pavlovich will study the test in two groups of patients: men who need initial biopsy, and men already diagnosed with prostate cancer who are undergoing prostatectomy.